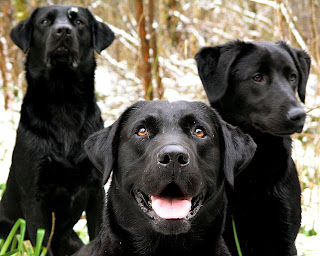 DOGS MAY ONE DAY RULE THE EARTH! Evolutionary biologists have warned that the human race should become more alert to the possible ascendency of dogs to the position of "premier species" on the planet. The U.N. funded Think Tank for Evolutionary Possibilities warned that the more time dogs spend in the company of human beings the more of our tricks they pick up. "Soon dogs won't be just fetching the paper, they'll be writing it," said one think tank member.

It is thought that clever dogs like collies and alsations will probably lead the future canine world while armed forces and law enforcement will comprise of eager pit bulls and impoverished mongrels in search of career opportunities. Poodles will make up the wealthier sections of society (because they look posh) and jack russlle terriers will mainly be employed in trades, such as plumbing etc. It is also thought that the middle classes will consist mainly of labradors and setters and that those annoying little rat-like chiwawa things that keep barking at people (who rarely pay attention to them despite an initial fright) will control the media.

When asked if cats would make a bid to be the top species on the planet a puzzled looking think tank member replied "um, ...they already are, who exactly do you think is calling the shots around here?" He then hurried home to feed someone called Tibbles and make sure the window was left open so she could get in and out of his house with ease.
Posted by Anonymous at 10:32 AM