ALL THE WORLD'S A STAGE 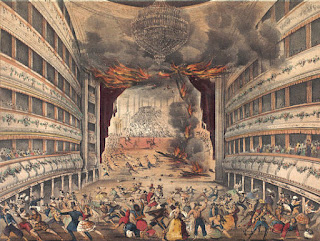 I'm putting on a play about our current world. I won't be giving any of the actors scripts so they'll have to improvise any old shite that comes into their heads. I'm hoping for some monologues that make little sense, but sound powerful anyway - in a strange way.

I'll also cue light changes and sound effects and pull up and down the curtain at entirely random times so as to disorientate the cast and audience alike.

The whole show will finish with the theatre catching fire and everyone being directed to fake emergency exits that all lead to the toilet.

It'll be just like real life. It'll be very realistic.

Then of course there is the encore. Played by the final living actor, burnt a gaudy orange, coughing and sooty upon the remnants of the stage. The last scene of all, that ends this strange eventful history, is second childishness and mere oblivion, sans teeth, sans eyes, sans taste*, sans everything.

*Oh, definitely tasteless.
Posted by Fugger at 9:20 PM No comments: