BANAL FROM THIS DISTANCE


The calls to prayer and the omni-drone combine to hum the Anti-Om. The last vibration. The frequency of wrong. The remote sound of death and razed rubble homes. Distant embers. Ribbons rise to oblivion. A dark cloak suffocates unseen desperation. Subdued pops denote the ease of destruction and the absence of any significant resistance. It's the antithesis of coexistence. Evil looks so banal from this distance.
Posted by Fugger at 3:22 AM No comments:

“War vs. Peace” by Joe Frank

To hear more -  Joe Frank's Website.
Posted by Fugger at 6:22 AM No comments:

The night is tonight or any other night that the green ship slips her moorings and sadly moves from the river's mouth and heads for the east. Hands dig deeper into pockets and the Custom House clock is seen through the mist of squinted eyes and shoes stamp on hardwood and shoulders are hunched though not from cold.

These are the have-nots and over there on that rising ground the lights of the haves reflect the self-righteousness and the light house lamp now beamed towards the Wicklow shore shines the last goodbye.
Posted by Fugger at 3:22 PM No comments: 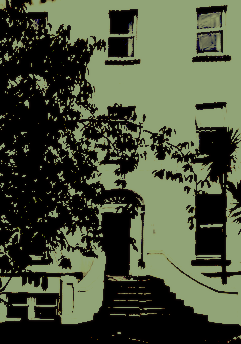 Yes, life is messy and being someone who wishes to live life correctly, I have found it correct to make a mess of my life. I am living in accordance with De Bruijn principles. I tidy my flat in a De Bruijn way. My dress sense could be described as Haute De Bruijn. My every act is De Bruijn, seeming insane and random but with a hidden rationale. What that rationale may be is beyond me as I have never been good at maths but I am content in the knowledge that there is a rationale there, …somewhere.

My philosophy is the De Bruijn philosophy. You may think it makes no sense but that is because you are missing the hidden sense, as am I, that is the point. If I could see ‘reason’ in how I live my life then I wouldn’t be living it in a De Bruijn way.

As approaches to existence go, I think mine trumps yours. Your way of life is the opposite of De Bruijn. You live a life that looks rational and perhaps feels rational but really, underneath the ostensible order, there is nothing but chaos. In reality, your actions are motivated by petty egoistic needs and random brain chemicals and are neither systematic nor logical. In fact, your actions can often be self-destructive. In short, your algorithm is banjaxed and it’s you that is the disordered one, not me.

Anyway, that’s pretty much word for word what I said in my defence to the judge before I jumped up onto his bench, took a shit in his wig and fled from the courthouse shouting:
‘Jimmy had a micky that was ten foot long
and he showed it to the lady next door.
She thought it was a snake
so she cut it with a rake
and now it’s only five foot four.’

That is all. Happy Christmas Fuggers!
Posted by Fugger at 2:24 AM No comments: 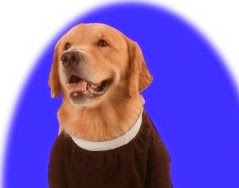 There's been a massive decline in vocations so the Roman Catholic Church have started training dogs to perform mass. Seminaries have become kennels and new dogs are arriving all the time. They keep gobbling up the Eucharistic host but besides that the dogs are very obedient and 'faithful'. They tend not to ask questions and molest puppies so it's working out. It should come as no surprise really, they already wear dog collars and the teaching of The Church is a dogma after all. It's also worth pointing out that the word 'God' is 'dog' spelled backwards. Catholicism has never been a religion to look at things in a forward way.

Soon the parishioners will be dogs too. Numbers have to be kept up in this regard. These days, the only people left in the pews are a dwindling selection of half-mads and nearly-deads so new bodies are badly needed. The liturgy will have to be slightly altered of course, to better suit a canine laity. Quadrupedal congregations will howl the Kyrie Eleison and bark the profession of faith and instead of shaking hands to offer the sign of peace there will be a sniffing of arses ...but not in a salacious way. There will still be parts of the service where those gathered are invited to stand or sit but the kneeling parts will be replaced with rolling over.

There will also have to be some modifications to the testaments but that's happened before, it's nothing new. Instead of his crucifixion on Calvary, Christ will be brought to the vets and put to sleep. Either that or run over by a car, it has yet to be decided. Also, from now on the Devil will be depicted as a cat. There will be a new commandment too, an eleventh. It will be a simple, single word instruction: 'fetch'. Besides these modest reforms, things will remain pretty much as they are.

This development has been the cause of a great new optimism in The Church with the exception of one remaining and significant concern, the takings during the collection. Dogs are not known for their monetary nous and the upkeep of parishes requires donations. How else is 'The Word' (or 'The Bark', as it will now be known) to survive and spread? Why should it be spread at all, for surely the true purpose of 'The Word' is the generation of revenue. It's feared that without financial backing the Catholic Church will, to use an irony laced idiom, 'go to the dogs'.


Quality human storage!
Posted by Fugger at 1:23 PM No comments: 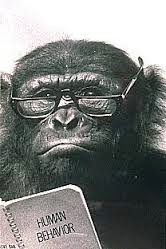 There wasn't much on telly yesterday evening so, instead of playing Sudoku or staring at Spankwire, I formulated an astonishing new range of philosophies that will shatter all known intellectual paradigms and existential stratagems going forward.

Below is just a small selection of what I came up with. Choose one you like...

Preposterousism
The acknowledgement that everything is just silly.

Post-coherence
This one is a bit tough to follow but stick with it.

Insubstantialism
The least satisfying of my reasonings but I'll throw it in anyway.

Commuterism
A comprehensive knowledge of public transport timetables that should come in handy.

Indeterminism
A vague approach to life that is a sister philosophy to the piss poor Insubstantialism.

Ultra-Irrelevance
A philosophy that can only function if no one adheres to it.

Neo-Proctology
Assists the philosopher in the extraction of his or her head from his or her arse.

BJ And the Bear
A largely forgotten American TV series that ran from 1979 to 1981.