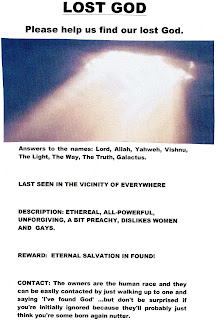 Click to enlarge and print out the missing poster above. Hang it in the few places in your locality that remain public property. Let's find God so we can thank him for our dinner and beg for forgiveness and all that.
Posted by Fugger at 1:15 PM No comments:

HOW TO STOP LIVING – WITHOUT DYING 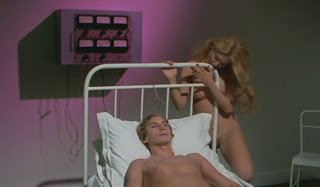 (Pictured: it's no use missus, he's left the building)

So, I came back to Earth with a sound like a slightly exasperated sigh that no one noticed. There I was, manifest again; vapour coalesced into matter. I had come from the place where nothing is everything and everything isn't anywhere to be seen. I was Nowhere and it was neither interesting nor uninteresting. It was nothing. You get there by going through this thing that is like a thing, you know the sort of thing, and then you are there and you know you're there because there is nothing there and you are nowhere at all. There isn't really much that can be said about the place other than saying that being Nowhere makes you nothing and not existing can be quite relaxing.

Would you like to try not existing yourself? I bet you would. It's all the rage with the kids these days. I'll show you how if you want. Nonexistence is quite an easy state to achieve but be warned, the process is often irreversible.

To stop living without dying you must first discard the locus of all that keeps you moored to this plane of existence. This is your corporeal housing - your body and the identity it has been given. To dispense with this you must repeat your name over and over and over again until it just sounds like a load of syllables and no longer sounds like it has anything to do with you. Do this while staring at yourself naked in a full length mirror. Concentrate on your face in particular. Examine it and stare at it until it cognitively reduces to nothing more than an amalgamation of features and is no longer something by which you are defined. It is just a communication tool, a conveyer of contrivance, something that is either being insincere or involuntarily betraying your insincerity. Your face is just a mask. Your head is just a helmet. Your body is just a suit. These things are not you. Take them off.

If you have done the above you will find you have upped anchor and sailed away from the grounded and socially enforced sense of self that is considered the only one possible in today's physicalist culture. What does this feel like you may wonder? Well, it's pretty much an out of body experience. You will become a spirit. You will regard your body and the name it is called as things that are associated with you but no more you than the car you drive or your telephone number. You will float in a world unmediated by words and all the insidious assumptions that come with them. You will be in a world of ideas and potential. A world of mental energy. A world undecided. The world of spirits. (Spirits are not the same thing as ghosts by the way, ghosts are echoes of the dead, spirits are very much alive.)

You will float around (it's not really floating but that's as close as I can get to describing it) and you will see things for what they are and everything they possibly could become, which is nothing at all. I can't really describe what it is like to you any better than that because your ability properly grasp the experience is akin to a goldfish's ability to get a decent idea of the world outside of its bowl. It's beyond your comprehension but believe this: if you follow my instructions and stop living without dying you will be free. Remember though, once free it is very hard to be recaptured. Unlike me, you'll probably never return to the prison of your body. Your body will not be dead but it will be considered catatonic and moved to a medical facility where it can be fed through a drip and filled with flamboyant drugs.

What do you think the story is with all those catatonic people? When you are looking at a catatonic person you are looking at an empty prison cell. The spirit of the entity that once was trapped there has long since escaped and now roams free. This is what is really meant by the popular phrase, 'set your spirit free'. Of course, you'd never hear Dobbo say that on the Six-One News but that's because the powers that be want to keep us all on the physical plane. 'They' need us here so 'They' have made us prisoners in their invisible prison. 'They' are masters of this illusory domain, this battery farm for brains, this cognitive concentration camp.

'Who are 'They'?', I hear you ask. Well, that's a story for another time. Not next time but a time close to next time. Maybe even the time after next time or maybe I'll never bother telling you who 'They' are at all. Who knows? It all depends what mood I'm in.
Posted by Fugger at 12:38 PM 4 comments: