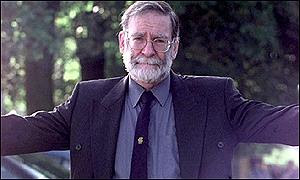 ‘I’m proud of my son because he’s so ambitious’, a friend’s elderly mother said to me recently. ‘So was Harold Shipman’, I reminded her. She looked more offended than reminded but I got to make a point and have a laugh while I was at it and that’s the main thing isn’t it?

I mean, ambition is all well and good for the person who has it but is it really an admirable trait? It might be if the ambition is to cure cancer but what if it’s a weird ambition like Harold Shipman’s? Even if it’s just a normal ambition, like an ambition to get a promotion for example, I still don’t see what’s so admirable about it. Such an ambition would be in no way ignoble but that doesn’t make it admirable. It just ‘is’. Admiring somebody for having such an ambition would be like admiring somebody for having long arms or something.

Intelligence is another attribute that is considered admirable but actually isn’t admirable at all. Like its overrated bedfellow ambition, intelligence is just an advantage that can be used for good or bad. Harold Shipman must have been intelligent to get away with what he did for so long, not to mention getting the qualifications to become a G.P. in the first place but is that admirable?

Now, people might think I’m just saying this because I failed all my exams and don’t get out of bed until The Afternoon Show comes on but they’d be wrong. I don’t hold a grudge. I’m just making a point. I don’t expect people to admire me because I’m stupid and lack interest in life in general so why should they insist I admire them for possessing the opposite traits? In fact, now I’m thinking about it, I could argue that laziness and thickness are more admirable than ambition and intelligence. If Harold Shipman was thick and lazy he wouldn’t have been able to pass his medical exams or bothered his arse playing God with the lives of so many pensioners. So, in a way, if Shipman lacked the traits that get so much praise in our culture he might have been a better person. Or at least, a safer person for old people to be around.

So, to close, if you are reading this and you consider yourself to be an ambitious and intelligent person then good for you and I am not, for one second, suggesting that you are like Harold Shipman. All I’m saying is that you are more like Harold Shipman than I am. It’s just an observation. There is no reason to get uptight about it. I know how uptight you ambitious sorts can be. That’s another aspect of that particular attribute that’s unworthy of admiration now that I think about it.
OK, I’ll leave it there.
ALSO
NEW CRAP MAN:
http://crapmancomic.blogspot.com/
Posted by Fugger at 11:32 AM No comments:

'Hate the sin not the sinner,' says Fugger over and over and over so I was very moved to see all the understanding tributes paid to maverick gun enthusiast Raoul Moat on the Internet. Here are some of my favourites:

'I ain't condoning it, what he done, people are dead, people who were alive, but if his bird wasn't giving him no grief they'd still be alive. Stands to reason, don't it?'
James Smith,
Isle of No Blacks No Dogs No Irish

'If everyone went around doing like what he did there would be bloody carnage everywhere. Life wouldn't be worth living. But, fact is, everyone doesn't go around doing what he did and it's OK once and a while coz it gives the telly something to talk about now that X-factor isn't on and Big Brother has gone rubbish. Stands to reason, don't it?'
Susan Blunt,
Bushell On The Box

'If he'd of killed me or the missus I'd've gone for him. Really I would. But he didn't. He only killed people on the telly and that's pretend ain't it? So, I think they were wrong to shoot him when all he wanted was a sandwich and to lay a few upper cuts into his bird. It's political correctness gone mad. Stands to reason, don't it?'
Terry Fletcher,
Crisps and Larger

'He was right to do what he done. It's like that fox that attacked them babies. If them babies weren't giving that fox no verbal they would never have got a going over. Stands to reason, don't it?'
Bertie Flunt,
Kebab and Chips

'The pan-feminist politburo cast this man into the realm of the forgotten and uncared about. "Your feelings don't matter" they said and, like a warrior denied a war, Moat lashed out the only way he knew how. There is a star that shines brighter than all the others in the firmament tonight and its name is Raoul. We've all lost a brother, a son, a father, a bloody good mate. I'm crying writing this. Raouly was another victim of post-Maquaid Ireland even though he didn't live here and probably never visited or even considered visiting. Stand's to reason, does it not?'
John Waters,
Irish Times

'If he weren't goin to do it I were but he did so I don't have to do it but I swear I would have done it and better too like in a film it would've been or a f*****g game and I'd've got books named after me and other stuff too. Stand's to reason, don't it?'
Harry Windsor,
Buckingham Palace

I liked Waters' one the best.

IN OTHER NEWS: A new CRAP MAN adventure is up at...

AND if you're in Dublin you should head to Film Base on Curved Street Temple Bar on Saturday during usual shopping hours for SUMMER EDITION 2010. It will feature lots of interesting items from the comic small press and other quality artistic ventures. Go! Stands to reason, don't it?
Posted by Fugger at 5:05 AM No comments:

The time has come to liberate small press and web-comics from the stagnant tyranny of artistic competency! Lower your expectations readers, it's CRAP MAN!!! 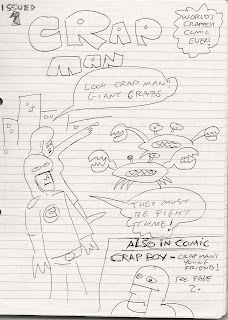 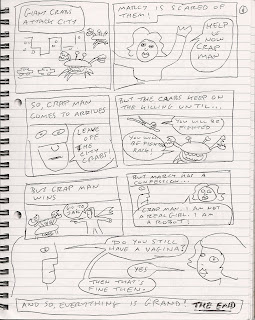 READ THE REST OF ISSUED ONE AT: http://crapmancomic.blogspot.com/
Posted by Fugger at 12:09 PM No comments:

Labels: comics, crap man, hasn't that kind of thing been done before?, really awful, terrible, why?

EVERYONE THINKS THEIR DOG IS CLEVER 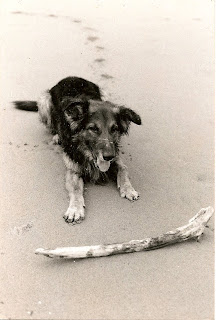 Everyone thinks their dog is clever but mine (Jake, pictured above) genuinely was. I realised this after his death a few years ago. I was going through his things and discovered a poetry collection he had written and submitted to Aosdana, along with a request for membership. As far as I could ascertain from the dog’s papers, Aosdana never got back to him. Despite the snub, I find Jake’s verse to have an uncontrived primal quality that really appeals. Below is one of my favourites from Jake’s oeuvre. Have a read and see what you think:

I like the parts concerning the environment and the insanity of war. Surprising, as he never showed that side of himself to me when he was alive. He always seemed more interested in food or sticks or impregnating that dog that belonged to next door. I really think his stuff is good though. The full collection is called Four Legs and the Truth and I’m considering publishing it myself. It’s better than Cathal O’Searcaigh’s stuff anyway.

IN OTHER NEWS: SALVO GUEST APPEARANCE ON RDC BLOG.
Posted by Fugger at 3:18 PM 2 comments:

I'll never forget the time my father went funny down the shops. He took down his pants and started crying in aisle seven. He was eating a bag of Rancheros at the time. He hadn't even paid for them.

My family never spoke of the incident again but if you ever mentioned Rancheros, or if an ad for Rancheros came on the telly, my father would just get up and leave the room. I used to occasionally mention Rancheros on purpose, to get rid of him when he was nagging or pissing me off. It was like a magic word.

'Dad, can I watch Doctor Who?'

'No, I'm watching the tennis.'

'Well, can I have the money for a bag of Rancheros then?'

My father gets up from his seat and leaves the room, head bowed. I settle down to watch Doctor Who.

Do you remember Rancheros yourself? There were cowboys on the front of the bag. They tasted quite nice the old Rancheros. There was a strangely empowering flavour to them.
Posted by Fugger at 11:42 AM 3 comments: