Dave Fanning in the RTE Guide!!! 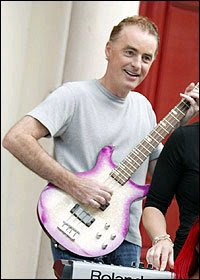 I think The RTE Guide should interview Dave Fanning and have a headline over the interview that says: 'Fanning The Flames of Rock' and in the interview Dave should talk about his life with his wife Aine (Is his wife called Aine? She probably is.) and what he likes to do on his days off. Then the interview should finish with Dave recommending the 'new one' by Gerry Fish and the Mudbug Club or The Walls or someone like that.
That would be good wouldn't it? It would though, wouldn't it? Well, I think it would. I think it would be excellent. The interview should be about 700 words long and feature large images. Ideally, it would be written by Truman Capote but if he's busy or dead they could get some middle or upper class bloke who wants to be a journalist (but isn't sure why) to write it.

MEANWHILE: CRAP MAN V CRAP GIRL: WHO WINS FIGHTED??? Click link below to find out. . . http://crapmancomic.blogspot.com/
ALSO. . .
Rough youths from the locality have made a video entertainment and, after a somewhat confrontational exchange, I have been encouraged to link to it here, click link:
I'm Matt Dillon (get out of my way) - Schmackey and the Salads!
Posted by Fugger at 12:30 PM No comments: 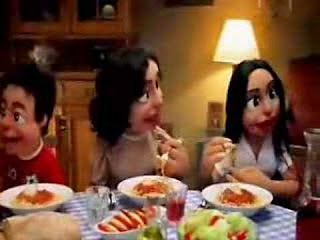 That's her to your right.


I was chatting to this guy I kind of know the other day. I was telling him what I'd been up to, my opinions on this and that and a bit of personal stuff about my upbringing and so on. Actually, I started coming out with quite a bit of personal stuff and I'm not sure why. It wasn't a conscious thing but maybe, on some deeper level, I was trying to draw him out, innately assuming that conversations work on a quid pro quo basis. I'm not sure what I was at to be honest but I continued on, encouraged only by the odd 'hmm' or 'I see' on his part.

I realised things had gone too far when I found myself telling him about my attraction to Sophia, the puppet from the Dolmio sauce advertisements (a felty lust pot and no mistake). When this staggering revelation received another paltry 'hmm' in response I exploded. 'LISTEN YOU F****R!' I roared, 'I NEED SOMETHING BACK HERE! SOCIAL DISCOURSE IS ALL ABOUT GIVE AND TAKE! QUIT HOLDING YOUR CARDS SO CLOSE TO YOUR CHEST AND PLAY THE GAME OR F**K OFF!'. 'Well, that told him', I said to myself as I stormed out of the confession box, slamming the door behind me.

Labels: felty lust pot, sophia, you would though wouldn't you

When something angers me, I always write to The Evening Herald. Like most people, a chief irritation in my life is myself, so. . .

Sawing wood floor panels recently, I filled my DVD player with sawdust. I should have removed the appliance from the room or wrapped it in plastic but now it doesn't work properly and I can't watch Iron Man 2. If this shoddy workmanship continues I will have no electrical devices left and wind up living like a a caveman. My commerce teacher was right about me when he pointed out my lack of attention to detail and said that I would end up sweeping the roads or something. I'm sure most readers agree when I say that my slipshod approach to DIY and, indeed, life in general is nothing short of an outrage. An OUTRAGE!

Yours in perpetual disappointment,

Name, address and condition with editor.

A couple I knew bought a house in one of those satellite locations. He travelled the long distance to and from work while she stayed at home to look after the kids. They didn’t actually have kids but she was ‘rehearsing’, as she jokingly put it herself. She spent her days online and watching digital television. They were neighbourless so there was no one around for her to talk to. They were the only people to buy a home in a ghost estate, a vast maze of semi-detached houses that had transgressed the fundamental law of supply and demand.

Actually, they did have neighbours of a sort, foxes. Foxes would congregate around the couple’s house at night. The couple reckoned this was because theirs was the only building for a considerable distance that issued waste. The couple were buried so deep in the empty suburb that wheelie bin service providers stood to financially lose more than gain by sending out a collection truck (there’s that law of supply and demand again). So, the couple took to using one of those compost bins for food scraps etc. and that’s what brought the foxes. The foxes would surround the compost bin, jump on it and make strange noises at it. (Have you ever heard a fox? It’s an eerie sound they make – like a scream).

The foxes’ futile attempts to topple the bin and consume its contents kept her awake while he, exhausted from work, slept on soundly. She’d look out from the upstairs window and watch the creatures. Sometimes she’d see up to ten foxes. She became fascinated by them, often commenting on the feral dramas of love and hate she witnessed. She’d speak about the foxes as if gossiping about colleagues at work. She even bought a book about the species but still couldn’t help anthropomorphising. A strange hint of admiration entered her fox anecdotes. ‘As if being a fox was an alternative lifestyle, rummaging around in rubbish and riding in hedges like knackers’, as her husband put it.

One Saturday the couple had a row. He wanted to go to Ikea again. She didn’t.
‘What do you want to do then?’
‘Something else. Something different.’
‘Like what?’
‘I don’t know.’
She’d been acting funny for a while and he finally snapped. Terrible things were said and she fled into the garden. She refused to come back into the house so he followed her outside. Then she shocked him by climbing the perimeter fence into the neighbouring garden. He followed her over the fence only for her to climb another fence into another garden. With a near infinite choice of gardens for her to escape to, he knew his only option was to go back to the house and wait for her to return. She didn’t. Come dusk, he was standing at their glass sliding doors calling out for her. She didn’t respond. Then he called the guards. They said they’d have a look around. They found nothing.

She stayed gone and he remained living in their house alone. He had no choice. In negative equity with a huge mortgage to pay, he was stuck in that silent maze of empty buildings and overgrown lawns. He went through a phase of thinking he occasionally saw her, darting between buildings or turning distant corners. He’d call the guards and they would sigh and promise to send out a car and then they wouldn’t send out a car.

After a while he stopped seeing her, unless it was her image looking out from the wedding album or staring out from one of the tattered missing posters he’d stuck around the place. Why he put up the posters was a mystery in itself. Who was going to see them? Maybe the intention was for her to see them and know that he cared. Or maybe he was just going crazy.

Late one night he rang me. He was in a terrible state. He was sobbing. I got him to calm down and tell me what was wrong. He said he was watching a DVD when he heard something out the back. He went to the sliding doors and pulled them across to see a multitude of foxes, fifty or so at least he said. They had successfully tipped over the compost bin and were feasting on the spilled out scraps. He yelled at the creatures to shoo them away. They fled into the centre of the garden and regrouped around a very large fox (about the size of a bike he said) that was standing its ground in the gloom.

He told me how he turned on the porch light to get a better look at the giant and, well, then he broke down and said he wished to God he hadn’t done that. As he told it, the big fox just stood there peering at him with what, he assured me, were human eyes. Familiar eyes. Her eyes, staring at him just as they stared from the missing posters. The fox stared at him and he, paralysed by confusion and horror, stared back. Then the fox opened its mouth and, with what seemed to him like ferocious anger, it screamed his name.

After the call, I immediately went out there. He wasn’t home. I never saw him again. I never saw either of them again. Ever. The estate is completely empty now. Plenty of foxes though.