Once upon a time,

...everyone woke up and moved their lips to speak but the only sound that came out was the sound of a klaxon. An alarming, blaring, enraging, fucking klaxon.

And everyone cleared their throats, but it did no good.

And everyone rinsed out their mouths, but it did no good.

And everyone sucked a lozenge, but it did no good.

And everyone was very unhappy because they thought they would never get the chance to insult each other again.

So everyone went on the internet, to type their insults into cyberspace, but when they placed their hands on their keyboards everyone saw that their fingers had turned into logs of shit. Ten logs of shit was all they had, five per hand. And everyone was startled to see their shit fingers and everyone screamed, but all they emitted was a terrible klaxon sound.

So there everyone was, honking and weeping in front of computers that were covered in shit.

But after a while, everyone adjusted because people can adjust to anything. The human race is a very adaptable species.

And in no time at all, it felt like nothing had ever changed and everyone just carried on. Instead of insulting each other they just honked at each other and instead of typing callous and cruel remarks into the internet, they just smeared shit all over their computer screens.

And they lived happily ever dafter.

Posted by Fugger at 3:53 PM No comments: 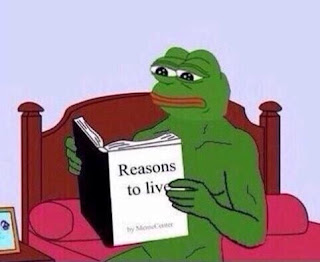 Young Pepes learned that to win you must be malicious. That empathy is a weakness. That sympathy is passé. That spite is right!

The least equipped of us to deal with the challenging vagaries of life, should Pepes be pitied?

Pepes degrade and humiliate each other in an attempt to exorcise their own degradation and humiliation.

But self-hate is non-transferable. They curse each other and they are all cursed.

It goes on and on. From snide to cutting. Accumulating. A toxic tsunami sweeps across our world. An inescapable, global hex.

Discourse is corrupted and now those racing to be POTUS exchange cruelties. So presidential. What good influences.

Being kind or even considerate and thinking 'hey, there's a whole human being inside that human being' is history.

Climate change, warfare, whatever, the Doomsday clock is reaching twelve.

It seems the concluding act of the human race is to piss on its own grave.

But if you can't beat them, join them. I think I'll give it a go.

So, my first and final insult to the poor Pepes of the world is this...

My remaining hope is that I live long enough to see you all die.

Your world in unrest.

Send in the drones.

Posted by Fugger at 7:40 PM No comments: