THE BIGGEST SHITE EVER IN THE HISTORY OF SHITES 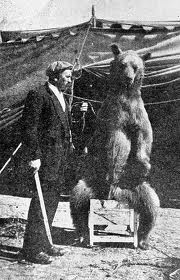 Remember that incontinent old circus bear they used have? Remember its blunted teeth and the way its claws had been pulled out? Remember the dry manky shite stuck to the fur at its rear? It used move around really slowly looking pathetic. It was different on the poster, standing on its hind legs at full height, roaring, snapping free of its manacles. It looked fierce in the artwork but not in real life. They used leave it tied up outside, even in the rain, remember? Remember how we used throw sticks at it and run away when it raised its head to look at us? As if it could do anything. Remember how sad its eyes were?

Crowds used react funny when it entered the ring. They were expecting the monster from the promotional material but what they got was this shambling shadow of an animal. Alberto would taunt the beast and it would open its jaws (as it had been beaten to do) and Alberto would stick his head in its mouth. Remember? We used laugh that he risked being sucked to death. Sometimes the bear got its moves wrong and Alberto would lash seven shades out the thing with his crop. It was difficult viewing. Alberto was vicious. A vicious drunk. There was never much clapping from the audience at the end of the bear act.

Alberto resented the rest of the performers. He used bully them. The women and dwarves got it worst. Alberto liked to make them feel inadequate because they actually had talent and this made him feel inadequate. Alberto knew he was dependent on the bear and he knew the bear was fading. The way he used beat the thing, it was like he wanted it to die quicker and hasten the whole charade to an end. Maybe there was something about the bear that reminded Alberto of himself. I think that was a theory one of the clowns had or maybe it was the pretty acrobat girl that said it.

Anyway, the bear didn't die, did you know that? No, it actually outlived Alberto. Story is, Alberto got really drunk one night and started kicking the thing and asking it to stick up for itself. To do something. He was laughing and saying the bear was a joke, that it could do nothing. He kept spitting swigs of vodka in the bear's eyes and laughing - swigging and spitting and laughing until he finally fell over into an inebriate heap. The other performers just watched, doing nothing to help the bear because they feared Alberto.

Although they didn't help the bear, the other performers didn't help Alberto either when the bear did the one thing it could to avenge itself on its cruel master. Clawless, toothless, arthritic, the bear is said to have lumbered over to the semiconscious Alberto and sat on the man's head. Then the bear took a shite, a huge shite, a massive shite, a really unbelievably colossal shite. A shite that was described by one onlooker as, 'the biggest shite ever in the history of shites'. The bear crapped on Alberto's head and remained squatting there, pinning the struggling man down and causing him to choke to death on bear shite. No one did anything as Alberto's limbs gradually ceased flailing and he left this world. Then there was silence. The bear looked around at the gathering and, for a time, everyone just looked back. Then someone broke the silence and soon enough everyone joined in. I heard it was the biggest applause that bear ever got.
Posted by Fugger at 7:56 AM