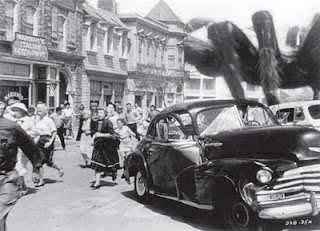 Tonight, more so than every other night, a great cloak will be thrown over the heavens and darkness will fall. It will be the time of Nyx, the Goddess of night, and she will slide up from the depths of our sleeping minds and crawl like a colossal spider across the land, casting a shadow blacker than a starless night.

Animal headed children will twirl and shriek in the air amongst spinning dead leaves and the psychic transmissions of disturbed rests. 'Mummy is here! Mummy is here!' the children will scream with malign delight and then unmask to reveal themselves to be the offspring of Nyx. The goat faced girl is Lyssa, the Goddess of Madness, the ravager of reason and comprehension. She takes the mind, every individual's only true haven from her expanding realm of unreason. She will slip into your head and stomp and whirl until nothing is where it should be. She will ensure you never again escape the grip of Phobetor, the pig faced boy, her nephew and the God of Nightmares, who bangs remorselessly and senselessly upon the shrill keyboard of rational cognitive processes.

Some of us will perish this night when the rabbit faced Thanatos unmasks, a monstrously deformed child, the God of death, who will drag us forever into a great unknown where science and empirical determination mean less than nothing. Where you are but a frequency in a hissing static discord of paranormal incomprehensibility.

And this night will howl and rage forever and we will all be its victims for the Sun is dead (kicked to death in a shop doorway as it slept a drunken vagrant's sleep). Screaming cats and birds will join every car alarm in the land, singing a panicked song of despair, an eternal cacophonous nocturne, a permanent soundtrack to this Hell on Earth. The agencies of the state will weep. Holy men will plead to a God long since murdered and then, worst of all, Nyx will crack open the Universe like a rotten egg and her summoned army will come oozing out.

Maybe you've seen the foot soldiers of Nyx, creeping from the dark recesses of your room and looming over your frozen bed bound body. The Old Hag, the Shadow People or maybe the Hat Man. Now they are here to stay, released forever from the nocturnal parole of sleep paralysis, defying the left hemisphere of the brain. These Archetypes of Twilight, these members of the Jungian Collective Unconsciousness, will become the new cops, the new teachers, the new doctors, nurses and priests. Un-Civil servants in a new state of infinite chaos.

It is happening in my town and will happen in yours. I warned you all. I wrote letters to both the Irish Times and The Herald, but it did no good. People scoffed, some mocked, Madame editor saw fit not to publish my missive . . . and now it has happened. The Twilight that ruled our pagan past has re-emerged. The shadow of the spider is spreading and soon it will swallow reality whole. We are all to be dead deranged dreamers and Nyx will rule this dominion for eternity.

You were warned.
Posted by Anonymous at 4:21 PM

Sure, sure, Stevie Nicks always had a bit of a witchy, pagan aura about her, but I never expected the crazy bitch to unleash this on us. After years of buggering our ears, she's now turned her attention to buggering our very souls. Maybe we can fight back by playing our Can albums REALLY LOUDLY.

could one be spared the worst of the night business having by sheer good fortune met a strange haggish woman while out who pressed on me a box of slop which would surely have gone to waste had she not met me and i agreed to consume the contents of the box at tea hour (a type of casserole) but took it into work next day and went down the field and tipped the goods into the long grass for the fox who comes that way, thereby neutralising the mischief of the night by squaring the left over dinner with the beasts of the field and associated howling denizens of the dark?

I think we should be okay if we place our beds in a north-south direction and view the new moon over our right shoulder.

This force is not Stevie Nicks but something almost as malign. The new-age and folk solutions to this problem are things that will be investigated on this blog going forward.