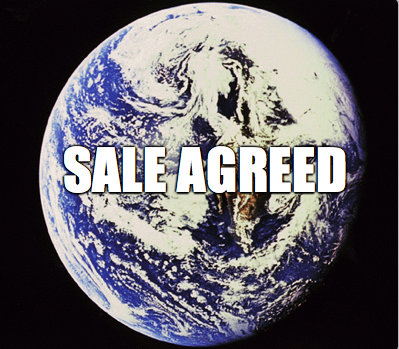 I'll steal your world from you and you'll rent it back. You'll appreciate it more because it has a price. You'll earn the money to pay for your keep by working for me. I'll pay you almost as much as you pay me. You can borrow the rest you need from me so you don't fall behind on the payments but you'll have to pay me interest. It's my world after all. You owe me, in perpetuity.

I'll do the same with your peace of mind. I'll rob your self-esteem and flog you placebos. I'll tell you that you are ill and sell you pills if you become fatigued. You are unwell. The world is well, that's why you pay for it. If you can't pay for it you are not fit for it. You are too weak to be part of the world. You are aberrant, a malcontent, a criminal, a skiver or sick. Take your pick.

I'll make you feel ashamed of being poor or poorly or too fat or too thin. I'll make you hate yourself, outside and in. I'll be the sole gatekeeper of your self-approval. I'll be your self-improver. I'll sell you books that tell you how to get by but they won't tell you how to get by so you'll have to buy more. Then I'll get you to pay me for an army and I'll send it to war against another army that you also paid for.

When the fighting is done, I'll charge you for reparations and get you to pay me to pay you to clean up the devastation. You'll pay me for the monuments that you'll build in my honour. If you died in my name, I'll say you were a martyr. I'll sell you a coffin and pass your debts to you kids. I'll be the one who decides where you spend the life after this. Heaven or Hell, I'll own you even in death and you'll thank me because it was too much responsibility to own yourself.
Posted by Fugger at 1:59 PM