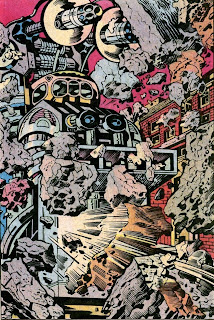 A dirty stomp around the Earth. Chimneys, cogs, pistons, buckled conveyer belts, murk - chug chug chug. It stamps another nation into mud. Crater creator. Death Freighter. It pisses petroleum and fills lungs with dust. We love the machine although it HATES us back. We endure and then die in the underpass of its rank and leaking belly. We love the machine because it shits money. Money money money floating down from its rumbling rusty orifice into our clasping clamour. All hail the money machine. The fiscal fecal fuselage empties as it swaggers and kills. Rat a tat tat. We're living the dream. Rat a tat tat. We excuse it in its wake. We look at the dead infants and debris and yes it's worth it, of course it's worth it, what would we be without it? We are soft and weak and organic. We are collateral. We are the expendable. We are the meat in its jaws. It chews and grinds us. It makes us worthy masticated mince. What else would we be? What else is there? Let's salute it. Let's sing songs about it. Let's define ourselves by it. We turned it on and we've forgotten how to turn it off. There is no alternative. Love the Machine! Another war starts tomorrow. Run for cover and watch it on TV. Kathryn Bigelow made a movie and it's in 3D. SAFRAN Thales SAIC. Lockheed Boeing BAE.
Posted by Fugger at 5:55 PM