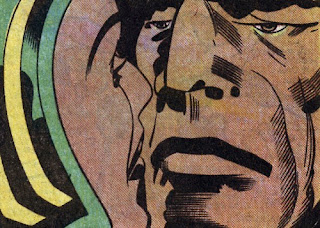 Do you remember that Star Trek episode where the beautiful alien woman asked Captain Kirk, ‘What . . .is . . .love?’ Instead of answering, Kirk demonstrated with a passionate kiss. Today Fugger (the blog of truth, the people’s blog) is going to try and answer that alien lady’s question properly.

Love is a virus that downloads onto your cranial hard drive via Trojan malware. The Trojan malware in question is the object of your devotion, be it another human being or some notion of a God or a sense of nationality or whatever. Love is an emotion that endows you with positive feelings but these positive feelings have negative outcomes.

Love might probably inspire you to write poems but these poems will probably be awful. Love might inspire you to observe abstract and pointless rituals or to march about the place firing guns like a dangerous idiot. You’ll feel elated at the time but remember, a similar elation was felt by Chris de Burgh when he composed The Lady in Red. Yes, de Burgh may have been feeling over the moon but his inspiration caused abject misery for discerning listeners all over the globe. Ultimately, love causes suffering.

All love (especially the sexual kind) is doomed. Be it eventual betrayal or bereavement or a gradual lowering of rose tinted glasses, love will always end in tears. The joy of love is akin to the joy of a child digging in to a fifth bowl of jelly and ice cream. Now it’s yummy but later it’s ‘Mummy, my tummy feels funny’.

Some might argue that, beyond its temporary sensual, spiritual, and aesthetic pleasures, love serves pragmatic functions, the practical benefits of love being the propagation of the species and societal order. Well, let’s deal with the propagation of the species first shall we? The propagation of the species is initially down to lust. Lust is not love. It’s just related to it, like a sleazy uncle that always wants you to sit on his lap. Sure, once born, the survival of offspring is due to the protective love of mothers but mothers only love their children because they are an extension of their genetic information. That’s a kind of racism when you think about it. Racism is something that could cause the destruction of the species, not its propagation. I mean, it might seem all lovey dovey and oochie coochie coo but when you see a mother snuggling with her child it’s nothing more than a two person Nazi rally. I’m sorry if that sounds bleak or cynical but it is true. Familial love is clan love and the Ku Klux Klan is a clan. I rest my case.

Now to deal with the supposed societal cohesion brought about by love. Social Anarchists and some religious types might say that love is an innate currency that makes the world go around. ‘Give love and you will receive it’ they say but we all know that is rubbish. Give love and it will certainly be taken but there is no contract that guarantees its return. When love is not returned it turns into resentment and this becomes hate and hate leads to war. Yep, love is the cause of war. We build bombs out of love and fire guns for it. How oochie coochie coo is that?

Some of you will say that hate and war are caused by intolerance and greed but intolerance is motivated by a dislike of those different to you because you love those that are like you (see the ‘love is racism’ argument above). When it comes to greed, well, what is greed but an inevitable result of love? You love something so much you want more of it, even if it means taking it from someone else by force.

So that’s it, the truth about love in a single blog post. I’m sorry to shatter any illusions. Love might feel all nicey nice and elevating but that’s just mad chemicals going off in the brain. In truth, love is the insidious instigator of all human tragedy or, at the very least, a major and necessary ingredient of those tragedies. That’s why I’ve invented a new emotion. An emotion to replace love. Yes readers, the means of our liberation bubbling in a beaker at my laboratory right now. But this post has gone on long enough so you will have to come back to find out about my new emotion next time. Seriously, do come back, you’re going to love it.

As I do not believe in any type of supernatural being or follow any religion of any sort I have decided I will take the word of Fugger as the closest thing to the word of God; starting with this piece.

Well..I mean..I’m not much of a hand at LOVE. Although I have known the love of an audience..It’s the way they look at you..a sort of twinkle in the eye. I remember it from Strike it Lucky. Like you say it’s intoxicating. If it’s there it’s like a million stars shining back at you and if it’s not..it’s like staring into a Black Hole. That’s where the canned laughter comes in. But say you take the notion of traveling in outer space being a sort of love a bit further..what I mean is..the early days of love is like blasting off in a rocket, those first days and weeks it’s like traveling through a shower of glitter. After a while you fall deeper in love and go on a bit further, you take a few knocks from asteroids, which damages the paintwork, but you keep going cause by then..well.. there’s no turning back. In the end you’re sort of trundling steadily into a horrible black void.

That song ‘Major Tom to Ground Control’. At first I thought that was about a bloke having engine problems.That’s a love song that is

God exists Templar, he's just a bit of an eejit is all.

That rocket analogy is first rate Barrymore. Why are we all so willing to 'blast off'?